I am not sure what I expected when I heard the word Cambodia, but I can honestly say I was shocked when I got there. The first thing I noticed while driving on the bus from Vietnam to the small beach town Sihinoukville, Cambodia, was how dirty the country was. There was literally garbage everywhere. I was trying to keep an open mind, but after 17 hours on a bus, (actually multiple buses with transfers and long waits at shady bus stops) I wasn’t feeling too confident. The surroundings looked very barren and poor. Eventually we got to the last stop on the bus on a random road and got out to grab our backpacks and make our way to the guest house. Literally, we got harassed by 17 tuk-tuk drivers trying desperately to get our business. The tuktuk drivers in Cambodia were so aggressive it shocked me! Finally, we negotiated a fair price with one of the drivers and piled our five battered bodies and 5 giant backpacks into one small tuk-tuk.

We were driving along the road and all of a sudden civilization appeared. There were bars and restaurants, supermarkets, tons of people walking up and down the streets, and of course dozens of tuk-tuk drivers. We checked into Sekal Guesthouse, which has a great location and clean rooms for a decent price (if you looking for a place to stay in Sihanoukville). We dropped off our backpacks, showered and ventured out to find some food. We stumbled upon a place called Mum’s Kitchen; which was a real hole in the wall place right across the street from our guesthouse. The food was incredible. At least one of us ate there, at least once a day for the entire week we stayed. Once we were full, we heard music and decided to wander into the bar next door called Utopia. Chaos ensued from there and we discovered that Sihanoukville may be a small town, but they sure know how to have fun. We spent all night dancing the night away running from beach bar to beach bar on the infamous Serendipity Beach.

We woke up the next day, got breakfast from Mum’s and caught a tuk-tuk to Otres Beach. Although Serendipity was a great place to go at night, we heard that Otres was much more laid back and relaxing during the day. It was about a 15 minute tuk tuk ride but it was well worth it. We basked in the sun all day on a virtually empty beach with tons of cute beach front restaurants and bars to choose from. We stayed and watched the sunset, which was spectacular and then headed back to Serendipity. We met TONS of awesome people and ended up staying for a week being total beach bums. There were SO many good food places, amazing pizza, falafel, Mum’s of course, really anything your heart desired. And our traveling crew… desires A LOT of food! ☺

One serious downfall was the amount of child hagglers there were scattered along the beach. It was so sad to see how young these children were and how late they were out at night. They would come up to us on the beach and jump up into our arms. The first night it melted my heart! Until I realized what they were doing; one would jump up and hug you as the others swarmed around. They would giggle and squeal as I tried to get them off of me. All the while, one of the boys was digging into my purse and snatched my wallet! Luckily, we heard about the crime, so we did not bring out our iPhones or cameras. I only had a small change purse with only enough USD to get me through a night out (about $10). Overall we had a fabulous time in Sihanoukville, but the constant haggling by the tuk-tuk drivers, massage women and poor, homeless children on the beach really leaves a sour taste in your mouth. 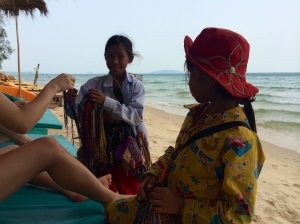 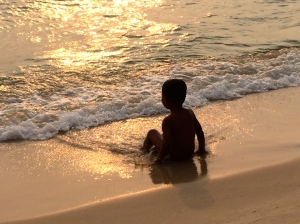 After a week of fun in the sun, it was time to move onto Siem Reap and the biggest attraction Cambodia has to offer, Angkor Wat. We took another overnight bus. This time it advertised itself as a “hotel” bus with free wifi and movies, etc. It was a LITTLE nicer than the other buses, but the ride was just as bumpy and just as awful. Sometimes you have to sacrifice and suck it up to be able to travel to all the places you want to go, such is life. We arrived midday and went to explore Siem Reap. It had tons of restaurants, shopping, massage places, art galleries, you name it. But it was hard to roam for too long because it was SO HOT. We decided to scope out a local hotel with a pool, and paid $5 to use it for the day. Well worth it! We called it an early night because we had to be up at 4:30 am to catch our tuk-tuk to be at Angkor Wat for sunrise.

Everyone always says make sure you go for either sunrise or sunset. I can tell you it was WELL worth it! But make sure you get there early because there are hundreds of people there and unless you are in the front you have no shot of getting a picture without the backs of strangers’ heads. We hired the tuk-tuk for the day because Angkor Wat is SO huge, there was no way we could explore on our own two feet. Our driver took us on the “short route” and we got to see about 6 or 7 temples. They were beautiful and each one was different and had its own unique story to go along with it. We could have definitely spent more than one day there but due to time constraints we were satisfied with what we got. That night we had a very special birthday to celebrate, one of our own, Miss Maggie Coogan. We went for an innocent dinner; which somehow turned into unlimited sangria and then escalated to a night exploring the infamous “Pub Street” and visiting an extremely old bar called “Angkor What”. It was a great night…that almost lead to me missing my 6 am bus back to Thailand the next morning! Happy Birthday Maggs! 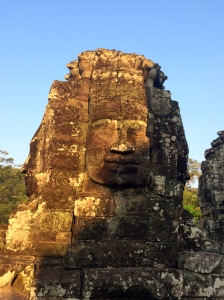 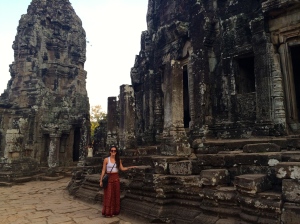 Luckily I made it onto the bus, thanks to the lovely Cambodian women who worked at the front desk of our hostel! She came into my room to wake me up! The journey from Siem Reap to Bangkok was one of the WORST I have experienced. The Thailand/Cambodian border is just about the sketchiest operation you could ever imagine but you just have to roll with it because a) No one speaks English and b) No one cares and finally, c) That’s just the way it is. If you are not willing to feel uncomfortable, South East Asia is not the right place for you to travel. But for me the discomfort is nothing compared to all of the wonders this magical land has to offer. I am willing to take 17 hour bus rides, sweat and hit my head 17 times on a white creeper van with no air conditioning, go to bathroom in rooms I wouldn’t even send a prisoner or my worst enemy to…if it means I can experience the rich culture, incredible nature, serene beaches, delicious food, and most importantly the incredible people; both locals and travelers that this part of the world has to offer. The good, the bad and the ugly, I love South East Asia and I am so fortunate to be able to explore here! Stay tuned for the last leg of the trip; back to Thailand! Sawadee-ka! Chok dee!

Nice to meet you, Welcome to my world!